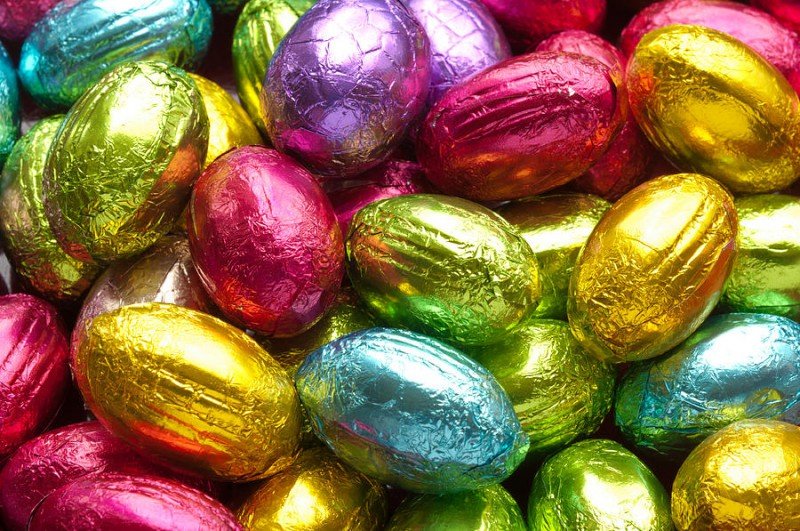 As you plan ahead for your Easter weekend, you might be thinking about Easter egg hunts, or other chocolate goodies that the Easter Bunny will deliver. This year, go beyond planning strategic hiding spots, and consider thinking about the origin of the chocolate you purchase for your friends and loved ones.

Last week, CTV News ran an article called, “The dark side of Easter chocolate,” in which they detailed worrisome ethical concerns in the chocolate supply chain, including child labour and slavery, and a lack of sustainable income for many cocoa farmers in regions such as West Africa.

For those of us who want to feel good about our impact on others and the environment, this isn’t great news. However, you may not have to give up your annual hunt. One place to start is to look for the Fairtrade label when purchasing chocolate. Many companies, like Camino, Endangered Species, and others offer Fairtrade and sustainably-sourced chocolate Easter treats, and even large companies such as Cadbury, Nestle, and Hershey are taking steps toward stronger ethical and environmental performance.

To help you in your pursuit, CTV also cited two resources for finding ethical Easter chocolate: World Vision’s “The Good Chocolate Guide” and the “ChocoFinder” app that will help you find specialty chocolate stores selling ethical products in your area.

This year, look for chocolate that won’t compromise people or planet – we think that’s a decision you can feel really sweet about!

Valentine’s Day, Easter, Christmas, Monday, Tuesday, Wednesday – all perfectly excellent reasons to celebrate with chocolate. Something else we can celebrate is the ever-increasing availability of fair trade chocolate. When you purchase fair trade chocolate farmers in developing countries, receive a reliable and living wage, get a social premium to invest back into their communities. In fact, according to Fairtrade Canada “When chocolate bears the Official Fairtrade Certified logo, it means the cocoa production has been independently monitored, giving you the assurance the manufacturer’s claim is true…Fair trade also encourages sustainable farming, so when purchasing a fair trade products you’re also helping the environment.”

Fair trade chocolate has been available in health stores and specialty markets for years, but confection giants are getting in the game. In 2009 Cadbury made a commitment to use fair trade chocolate in their Cadbury Dairy Milk bars and have since added fair trade Easter Eggs. In 2009 and 2010 they were the world’s largest buyer of fair trade certified cocoa. Kraft, who recently took over Cadbury, has promised to maintain that commitment. Kit Kat, owned by Nestle, is following Cadbury’s example, due to volume, the impact of such large companies using fair trade ingredients is huge and make a real difference to the lives of families in developing countries.

While this exciting move towards the use of fair trade cocoa by large companies is exciting and impactful, it’s important that we don’t forget the Tazamania Proverb “little by little a little become a lot”. There are many artisanal, certified fair trade companies providing top quality chocolate – these specialty chocolate companies are the backbone of the fair trade cocoa movement. These small companies are passionate about making a positive impact in the world rather than just making profit. By choosing to purchase from companies that are fair trade certified, you can feel good about the choice you’ve made and sometimes making the right choice can taste sooooo good.

In a world where your purchases have more influence than your political vote, it is imperative that you take all factors into consideration before pulling out your wallet.

Beyond the sexy consequences part 2: giving chocolate for Valentines Day

This post builds on our Valentines Day post from last year: Beyond the Sexy Consequences of Giving Flowers for Valentine’s Day. 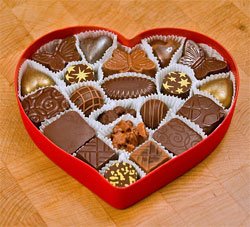 It’s Valentines Day. Before you present that fancy-looking box of chocolates to your love, ensure there’s a fair trade logo on the package. With chocolate supply chain concerns becoming more mainstream, it’s likely your special someone has read an article, scanned a blog post, watched a news story or catchy You Tube video outlining the ethical and ecological concerns in this industry.

Take for example an article running in this weekend’s Globe and Mail that covers the status of cocoa production in the Ivory Coast and Ghana, the world’s two largest producers of cocoa. According to the article, both countries are on a path to “ecological implosion”. Forests are being cut down to make room for more crop land, existing tree stocks are aging, soil is depleting, temperatures are rising and rainfall has become erratic. Add to this concerns of child labour and you have one very un-sustainable and un-ethical product. 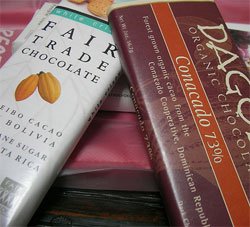 One way to remove the exploitive elements of chocolate from your gift is to buy official fair trade certified products. Doing so provides you with the assurance the cocoa production was independently monitored to ensure farmers received a reliable and living wage for their work. Fair trade also encourages sustainable farming.

Cocoa lends itself well to fair trade. It’s one of the few global commodities grown predominantly by small holders on plots of three acres or less. By meeting fair trade standards, small producers receive a higher price for their crops. Through additionally organizing into co-operatives, they can benefit from social premiums associated with fair trade projects to invest back into their communities for schools, roads and other initiatives.

To help you make the right decision this year, we’ve collected together a number of innovative fair trade chocolate resources.

If you pick-up a Cadbury Dairy Milk bar in Canada these days you may notice some changes to the packaging. Since this summer, Cadbury’s Dairy Milk line has been fair trade certified. The wrappers now include an internationally recognized symbol that assures the sugar and cocoa have been purchased from producers paid a fair wage for their crop. Cadbury’s first fair trade bars were released in the UK and Ireland in 2009 and more recently in Canada, Australia and New Zealand in 2010. According to the Cadbury website, going fair trade will quadruple the sales of fair trade cocoa from Ghana and affect over 40,000 cocoa farmers.

To accompany the release of its fair trade line, Cadbury has unveiled a marketing campaign that invites people to “see the big fair trade picture”. The campaign features print, billboard and online advertising as well as a redesigned website dedicated to the brand (dairymilk.ca). At the centre of the campaign is a series of murals in Toronto and Montreal designed by a Ghanian artist, each of which focuses on a particular benefit of fair trade. The murals fit together like puzzle pieces to present the “big picture”.  Themes of the murals include “Improving Local Infrastructure”, “Providing Access to Clean Water”, “Improving Local Health Care” and more. Out-of-home advertising also featured a summer street campaign that invited passersby to sign a petition supporting fair trade in Canada.

This move has brought plenty of attention to Cadbury and has some questioning if big business’ increasing interest in fair trade is good for the sector. On the one hand, more corporations moving some of their buying to fair trade could have a large positive impact worldwide. Further, the greater availability of fair trade certified products could raise awareness among consumers. There’s also the hope that other corporations will note their competitors shift and joins suit, for example Hershey’s or Nestle.

But is it enough for Cadbury to convert one of its lines to fair trade designation? If they’re committed to the tenets of the movement, shouldn’t they be buying fair trade inputs for all their products? It’s a good question. A skeptical view of Cadbury’s fair trade Dairy Milk may lead one to conclude its primarily a marketing stunt; an attempt to improve Cadbury’s public image without a full commitment to sustainability.


At Reeve Consulting we’re not quick to jump to this conclusion. We support incremental change and from experience realize that broader change takes time.  Companies face many challenges in converting their supply chains and in most cases need to start small. An important element for us is that companies acknowledge there are problems beyond those they’re starting with, and that moving forward there’s a plan for these issues to be addressed.

We’re hoping to discuss this further with Cadbury’s Ethical Sourcing Manager this week when we attend the Sustainable Supply Chain Solutions conference in San Francisco. Watch this space for a follow-up post on what we find out. We’ll also be tweeting from the conference at @ReeveConsulting.